Dahe Bridge is the second longest span high level bridge in the world with a tower to tower distance of 1,250 meters. The giant crossing is also the longest span bridge ever built in Guizhou Province, a region of China with several other colossal suspension bridges that include Qingshuihe, Balinghe, Beipanjiang Hukun, Chishuihe Chajiaotan, Malinghe Three and Dimuhe Bridges. Even more amazing the east tower of Dahe Bridge will stand 314 meters in height making it the second tallest suspension bridge tower ever built surpassing Japan's Akashi Kaikyo Bridge but just behind the 328 meter towers of Turkey's Çanakkale Bridge over the Dardanelles Strait.

Several types of bridge were studied including a giant Millau-like cable stayed viaduct and a multi-span beam bridge. Those who are familiar with China's high suspension bridges may also notice that Dahe Bridge is the country's first high level span to have suspended back spans that will give it a more visually balanced look. The main cable will have a span to rise ratio of 9.5:1 with a cable rise of 130.5 meters.

The first suspension bridge design was for a lower structure with shorter towers and unsuspended side spans.

Much of Dahe Bridge will cross over the town of Dahezhen. Image by Eric Sakowski/HighestBridges.com

The slope where the 314 meter tall east tower will be located. Image by Eric Sakowski/HighestBridges.com

An early configuration of Dahe Bridge with unsuspended back spans and large 120 meter prestressed beam spans on either side of the main towers. This design had a shorter east tower 270 meters tall. 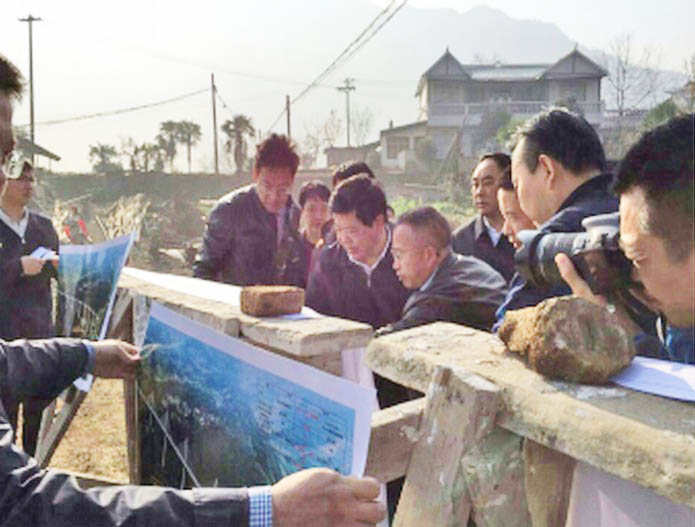