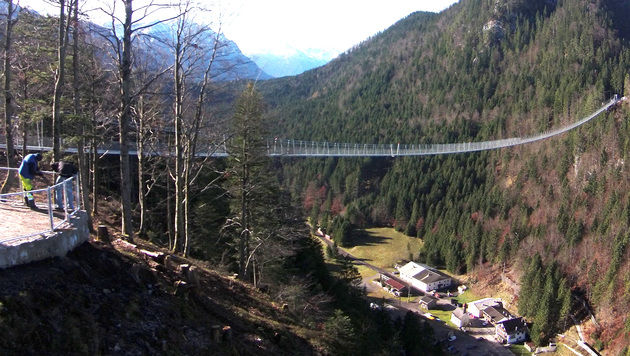 Opened in 2014, the spectacular Highline 179 Bridge is the 4th longest span footbridge in Europe. It was once the longest span Tibet-style suspension bridge in the world before being surpassed by others in Nepal, Switzerland, Germany and China. The name comes from the bridge crossing over the famous route B179 that winds through and far beyond the borders of Tyrol, Austria. The location was chosen to allow easy access between the Ehrenberg Ruins and Fort Claudia.

The 1.2 meter wide deck is supported by four 60mm diameter cables that are held in place by 8 rock anchors to a depth of 17 meters. The foundation to foundation length is 424 meters with a clear span of 402 meters that can support up to 500 people at one time. The two abutments have an altitude difference of about 12 meters and a maximum cable sag of 20 meters at full load. This large, curving sag along the deck is part of what makes the Highline 179 special as it essentially allows the bridge engineers to avoid constructing any towers that are common on most conventional footbridges with a flat deck. Such drooping spans are common in the mountainous regions of Tibet where the higher slopes allow the center of the deck to cross a safe distance above the river surface. The Skywalk Sattel Footbridge in Switzerland and the Geierlay Footbridge in Germany are the 2nd and 3rd longest Tibet-style footbridges in the world.

Among all footbridges in the world, only 8 have a main span longer then the Highline 179. This world record footbridge span was commissioned by WLF Projekt in Austria and designed and built by STRABAG A, SwissRope, Armin Walch (architect) and Paul Nessler (structural engineer).

The tourist attraction is open everyday of the year. You can see more at their official website: 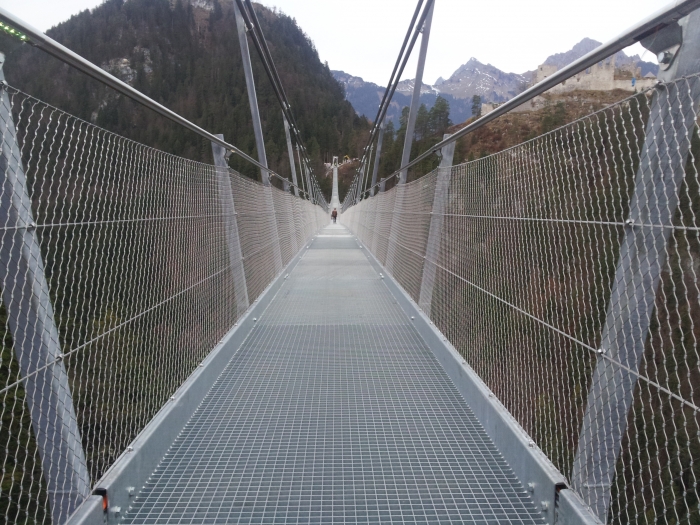