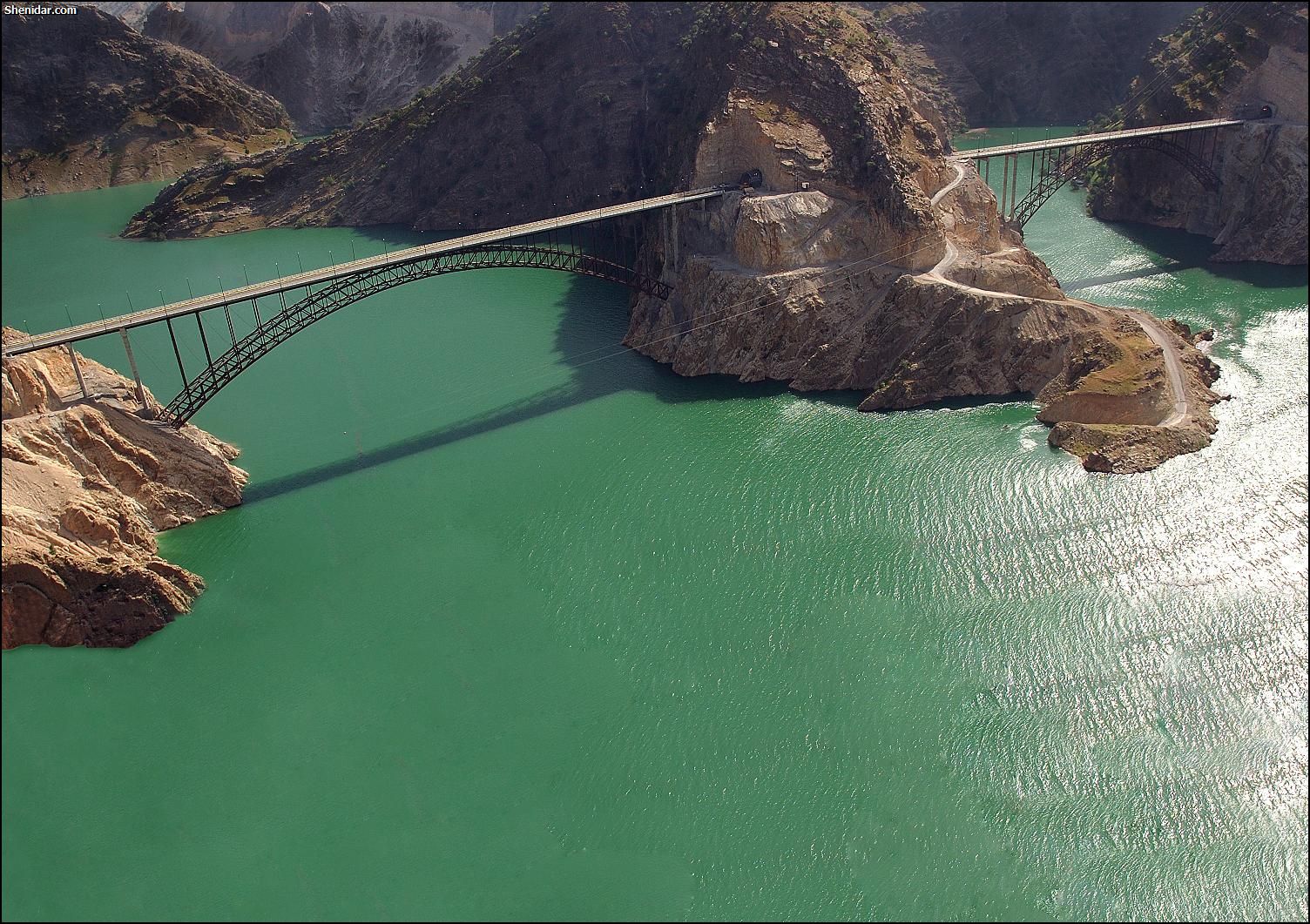 The Karun 3 Dam East Bridge is one of two large steel truss arches that were necessary to carry a former road across the deep reservoir created by the massive Karun 3 dam. Upon its completion in 2005, the West span became the highest bridge in the Middle East, surpassing the record previously held by Iran's 35 year old Ghotour bridge. The Karun 3 Dam is one of a series of huge hydroelectric projects that have been built along the Karun River which has the greatest discharge of any river in Iran and is hence the most important power producing waterway in the country. At 205 meters from top to bottom, the double curvature Karun 3 Dam became the tallest in the country upon its completion in 2005. The even larger Karun 4 Dam began operation in 2011 with a foundation to crest height of 230 meters. For a size comparison, the famous Hoover Dam near Las Vegas is slightly higher then Karun 3 but slightly lower then Karun 4.

The larger West crossing over the main channel of the Karun River has a hinge to hinge span of 252 meters with an overall length of 336 meters. The smaller East span crosses a smaller side canyon with a span of approximately 175 meters and a height of approximately 130 meters. The West span has a much greater span to rise ratio then the East bridge since both are of equal height above the reservoir. The Karun River is sometimes spelled as Karoon or Karoun.

You can see an informative video on the completion of the Karun 3 Dam, spillway operations, the filling of the lake and several nice views of the 2 arches below:

Another extensive video concentrating more on the construction of the Karun 3 dam. 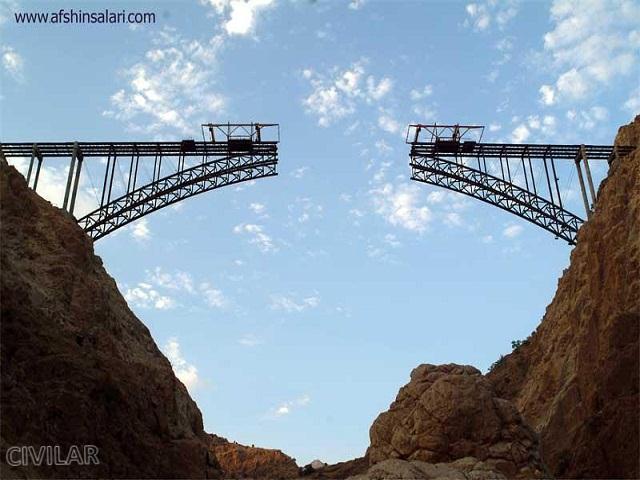 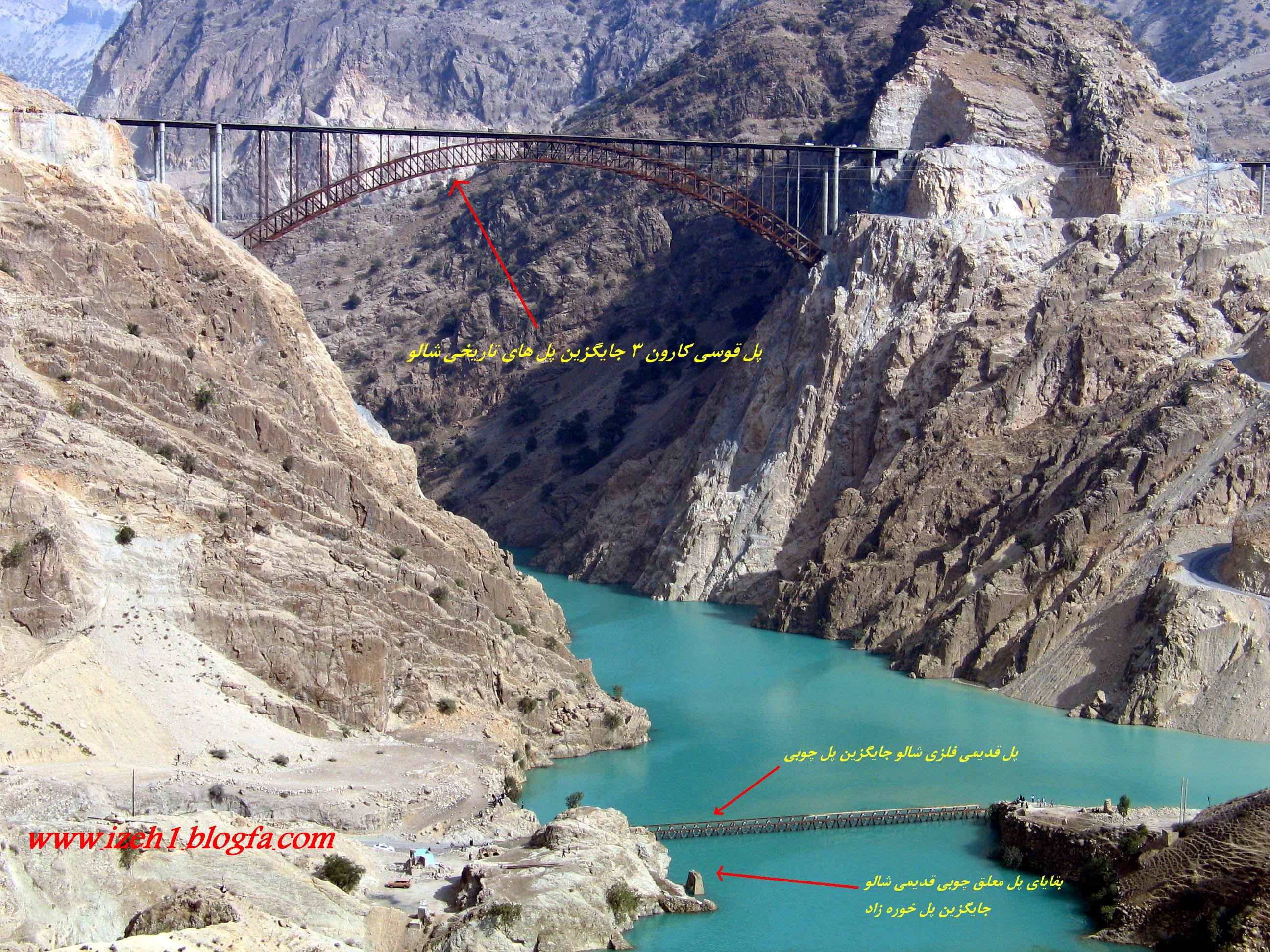 In the above view the reservoir had already risen some 40 meters, submerging the original Karun River bridge crossing. Image by www.izeh1.blogfa.com 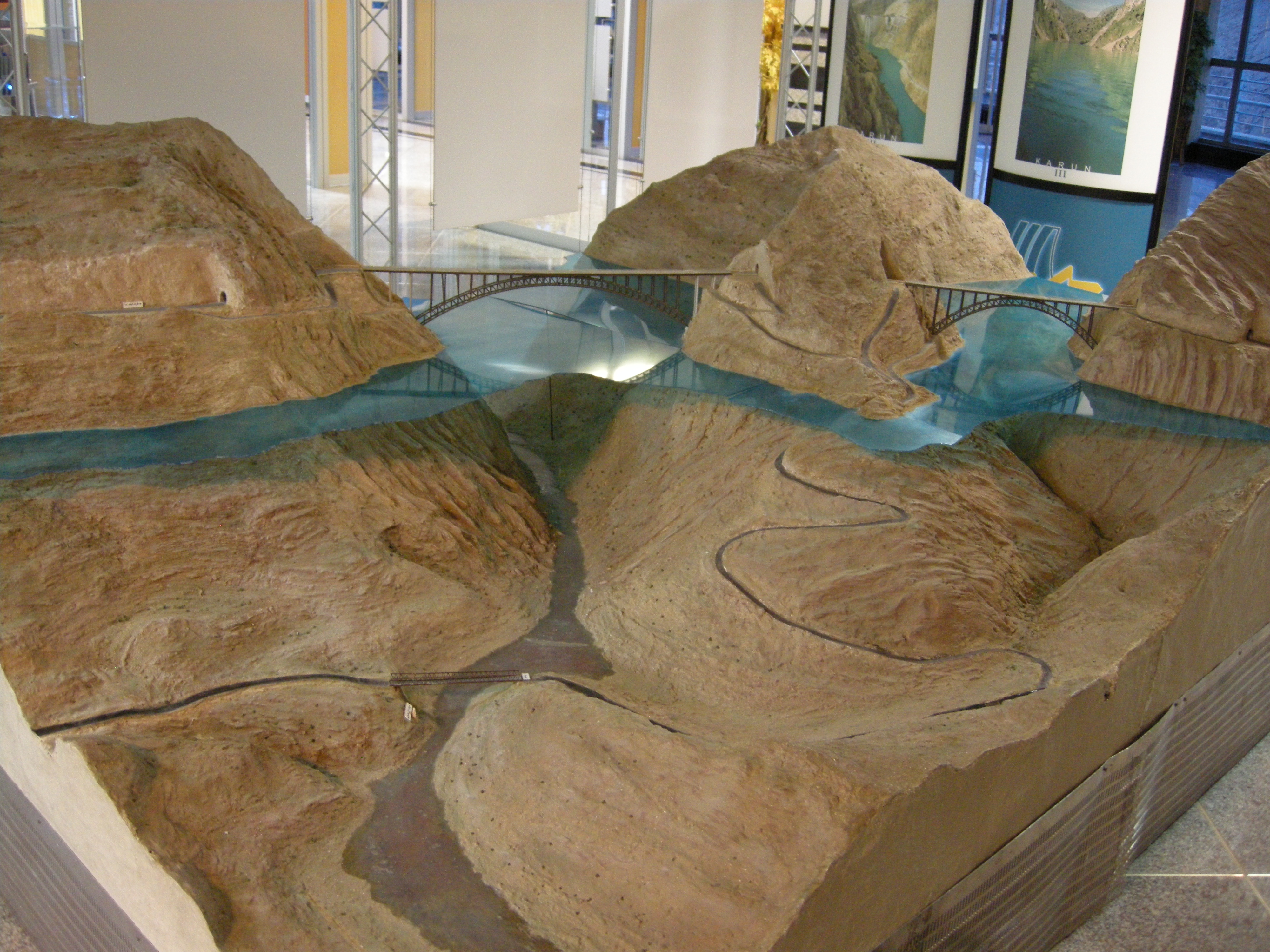 A beautiful model showing the new arch spans as well as the old crossing and the hidden height of the deep gorges below the reservoir. 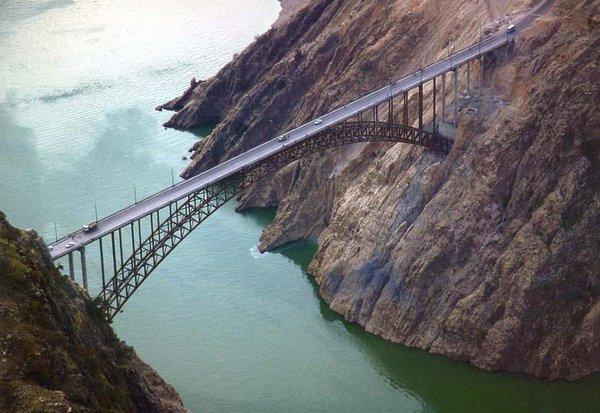 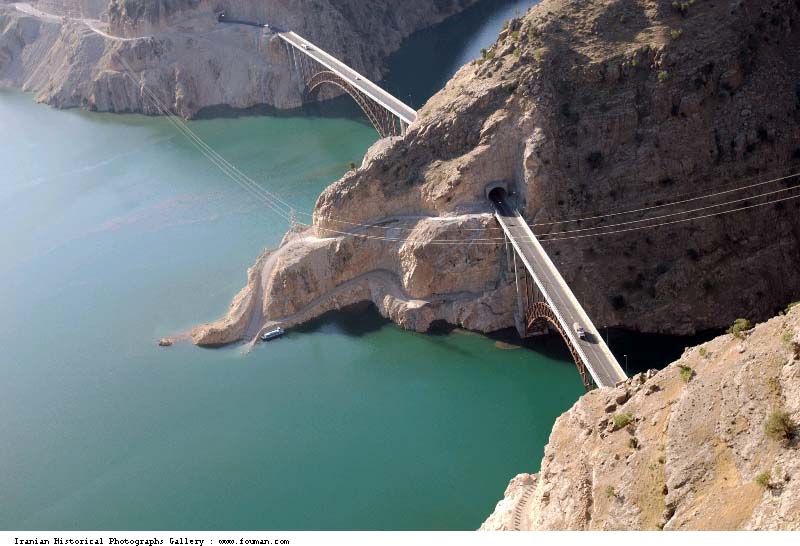 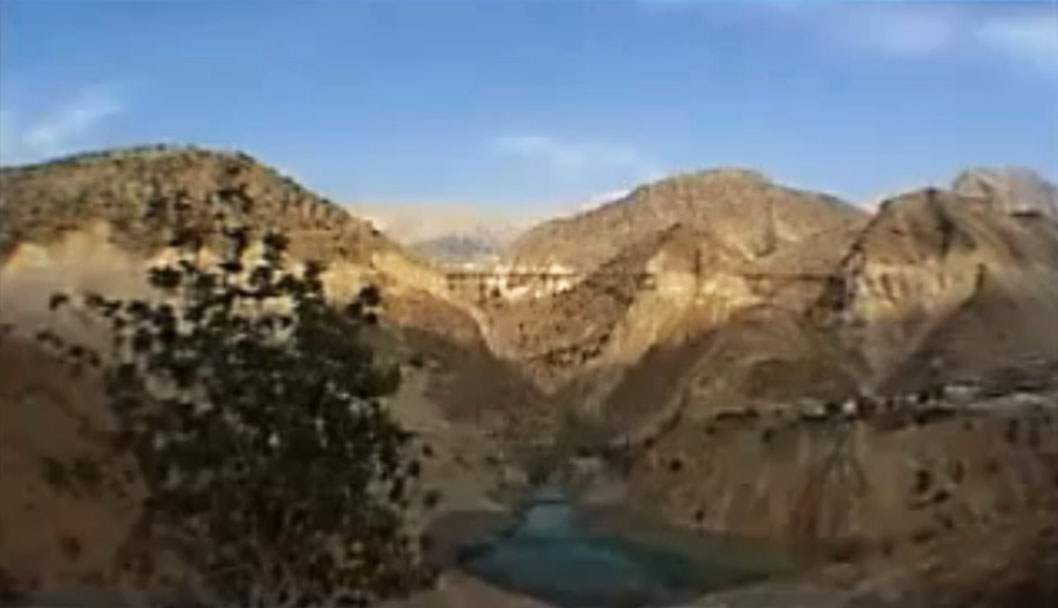 An image from an online video still shows the two spans before the reservoir formed beneath. 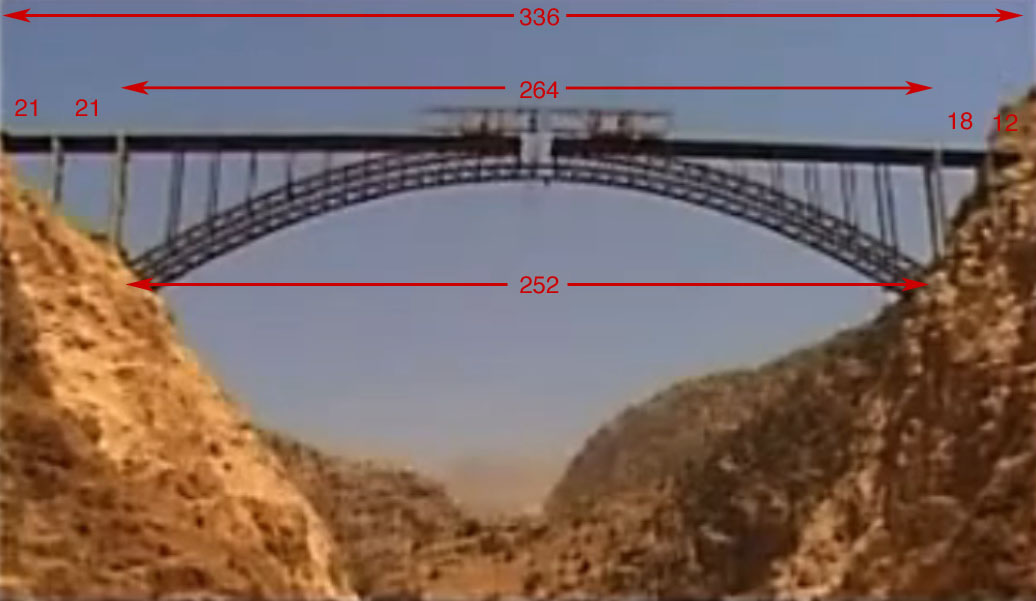 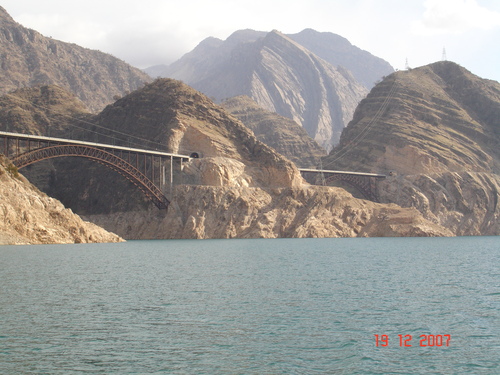 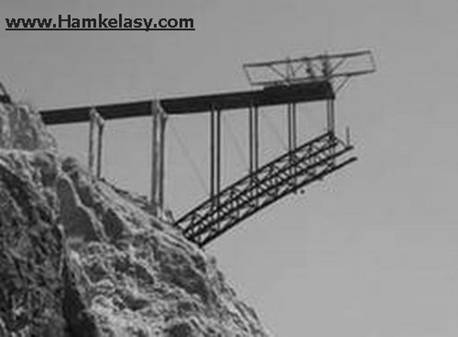 The construction of Karun Bridge was somewhat different than similar sized arches whereby a tower is usually erected on either side of the gorge and cables temporarily radiate out from it to support individual sections of the arch until the two halves are joined in the middle. With Karun, the roadway and support spandrels were built outward at the same time as the arch, eliminating the need for a high line. To prevent the two halves of the arch from falling into the gorge, several cables were attached from the road deck down to the arch within each spandrel panel. Once the next vertical spandrel support was built up to deck level and connected to another short span of roadway, then the arch rib was built out a little further and the process repeated itself. Once the two sides of the arch were closed in the middle, the temporary cable stays were no longer necessary though on the Karun spans they were left in place. Image by www.Hamkelasy.com 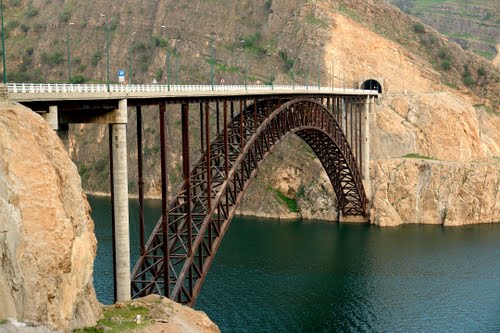 The full reservoir almost reaches up to the arch hinges. 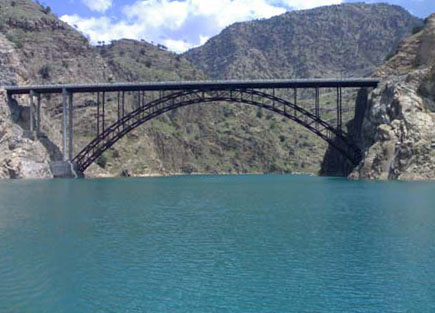 The smaller East arch is more circular in shape since the span to rise ratio is less then the longer West span. 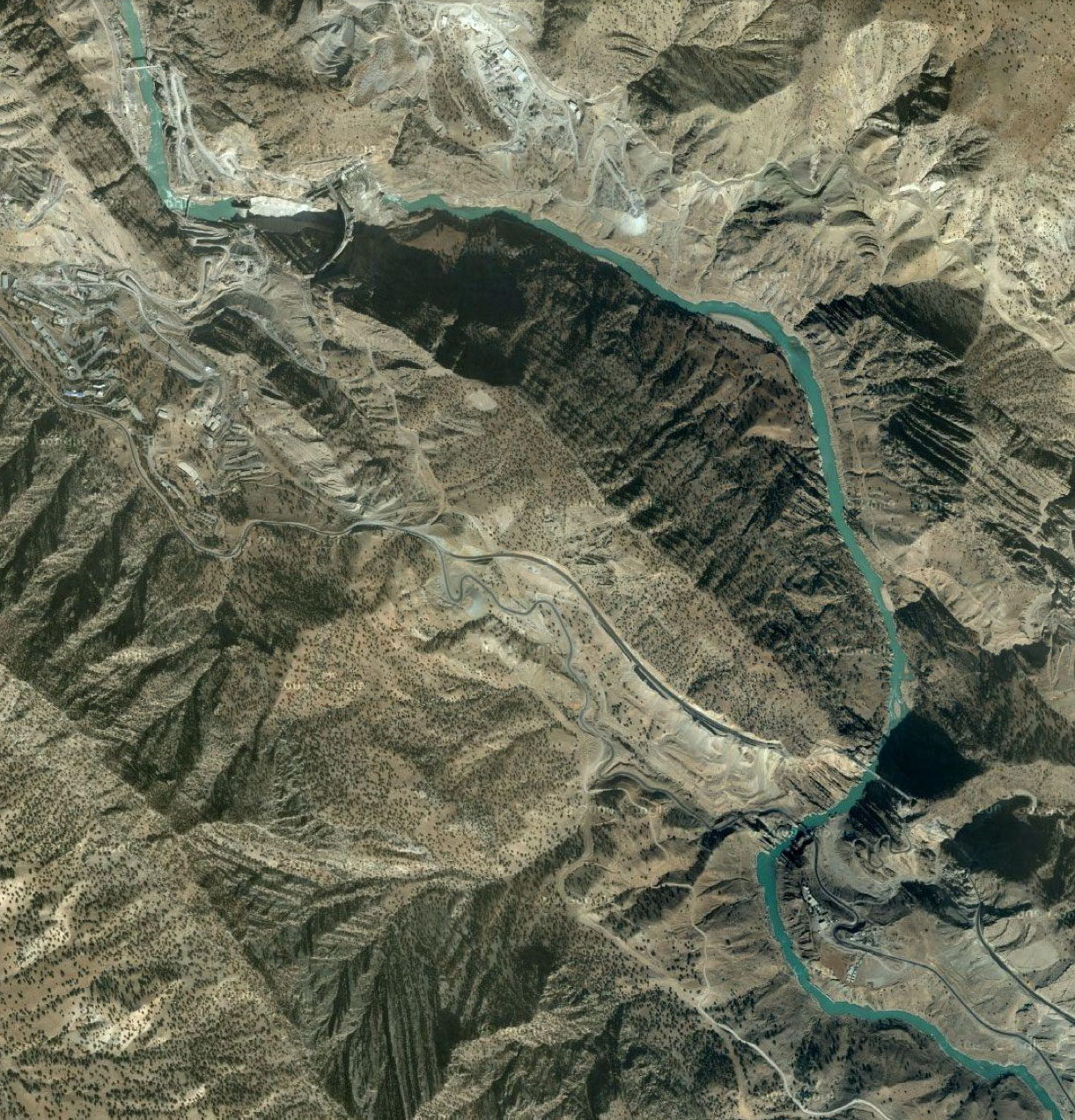 The two arches can be seen under construction in the lower right several kilometers upstream of the Karun 3 Dam in the upper left. 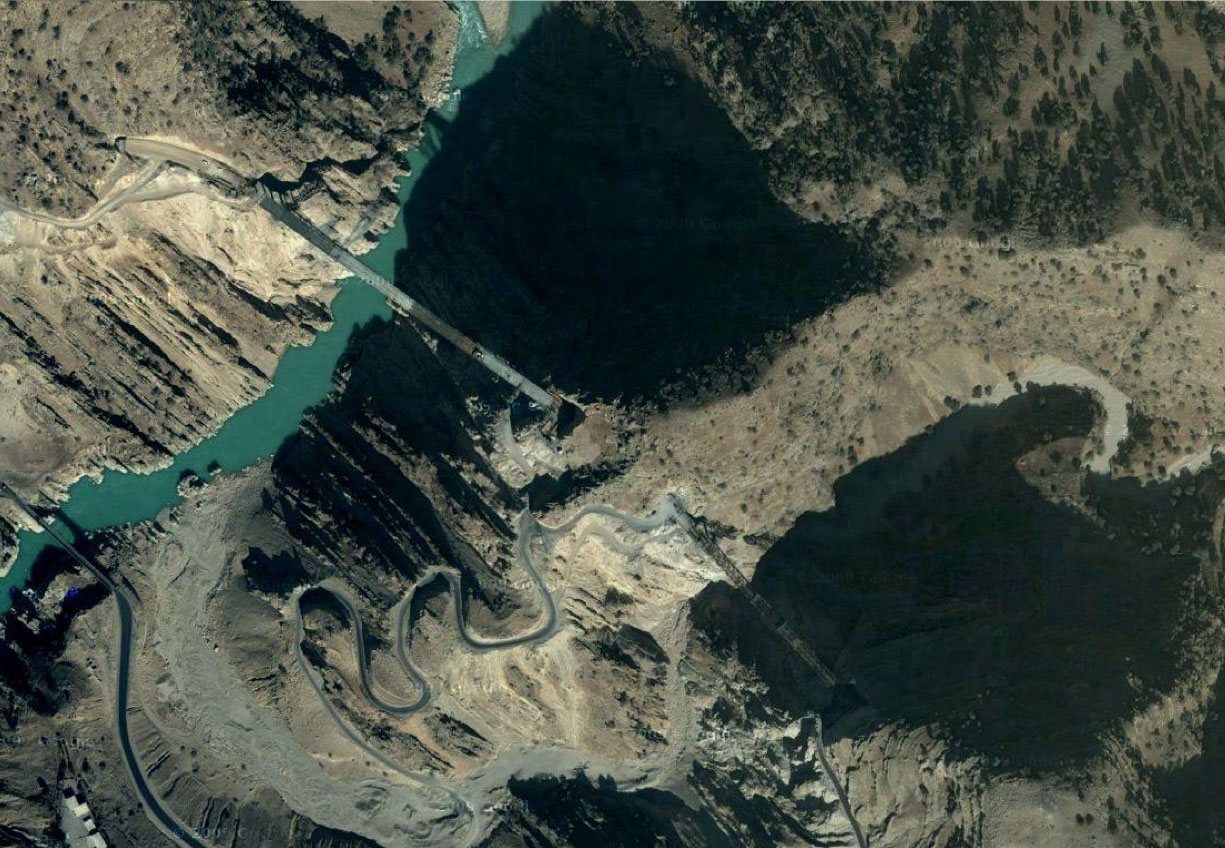 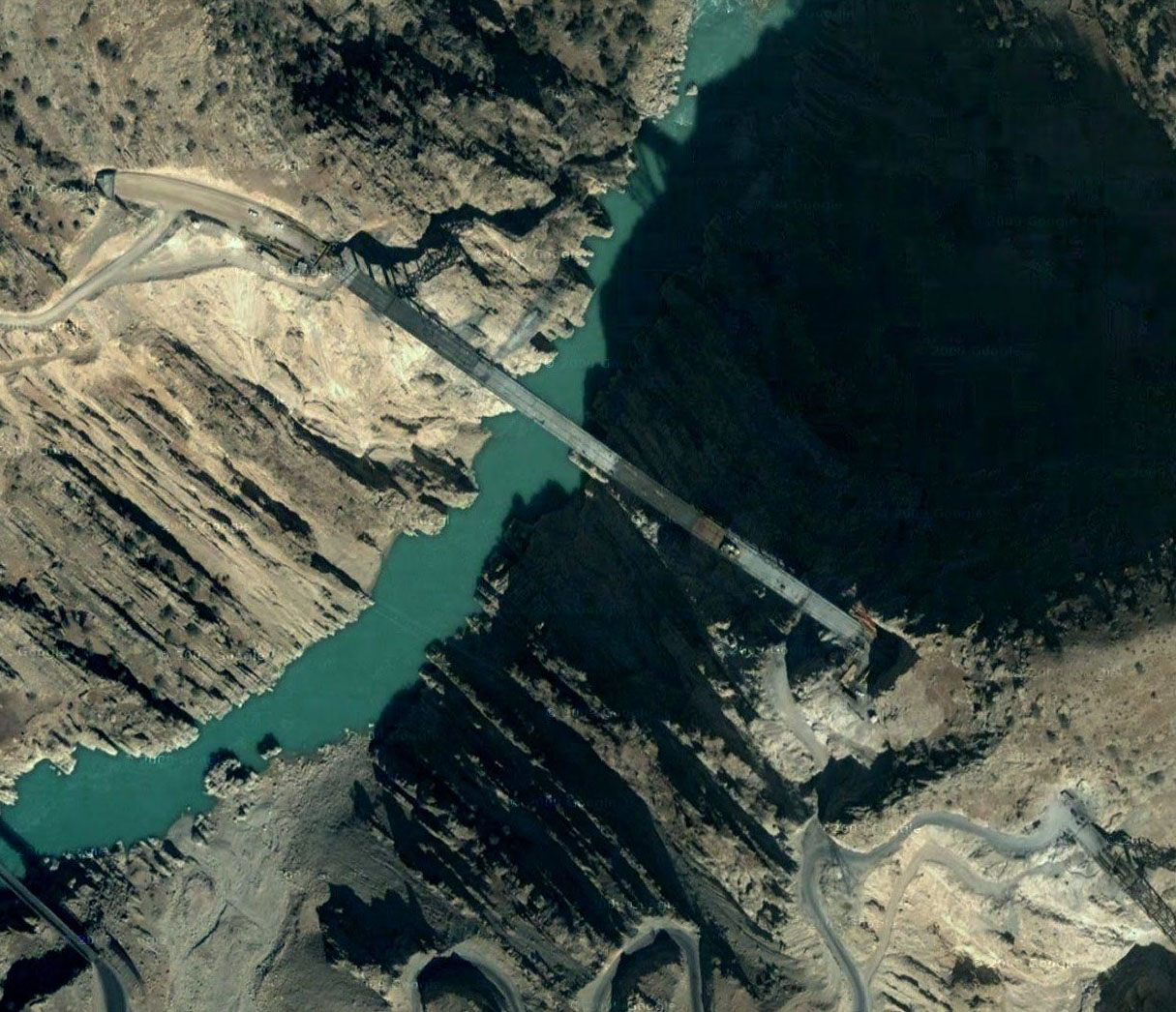 The West span under construction. 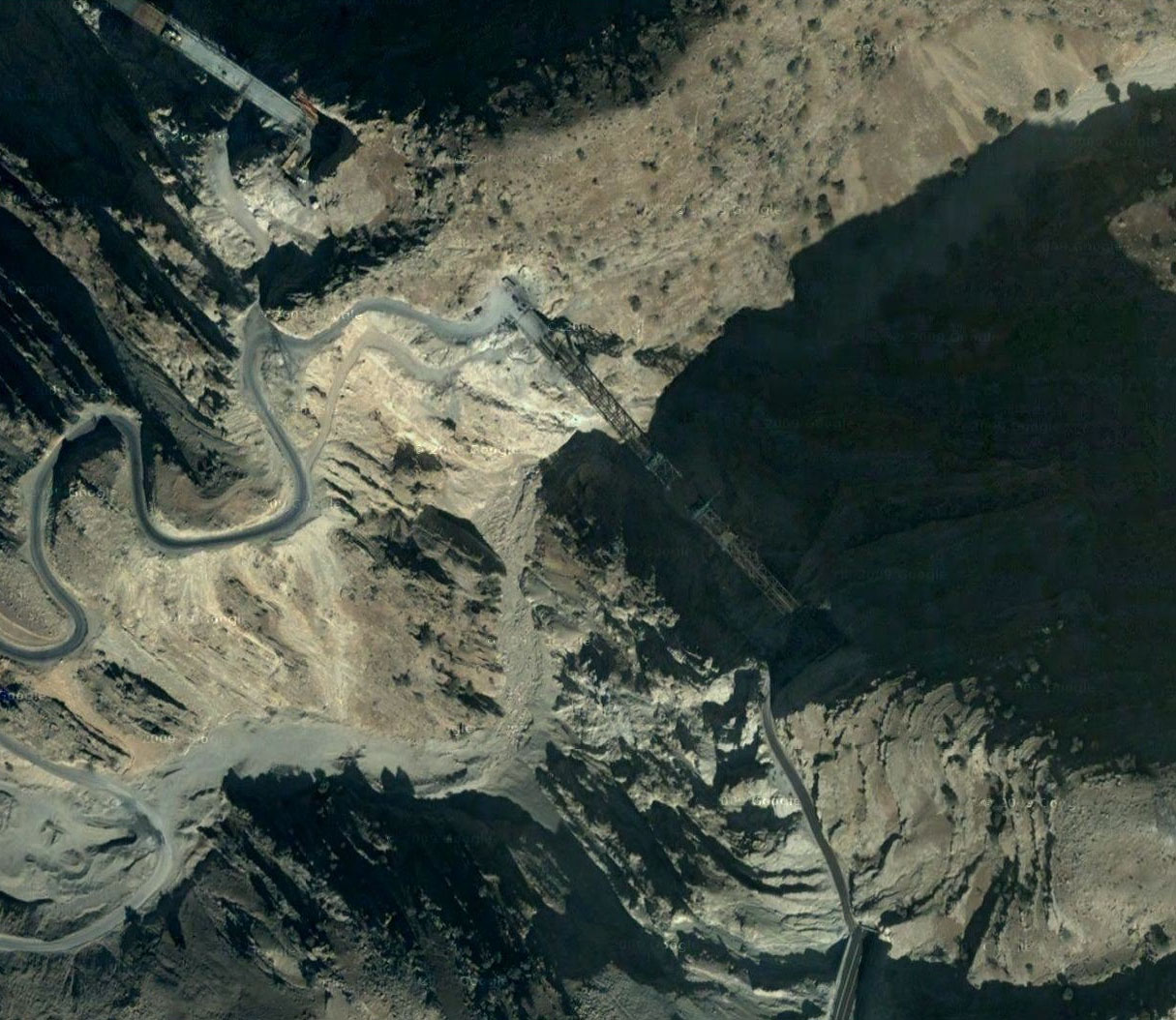 The East span under construction. 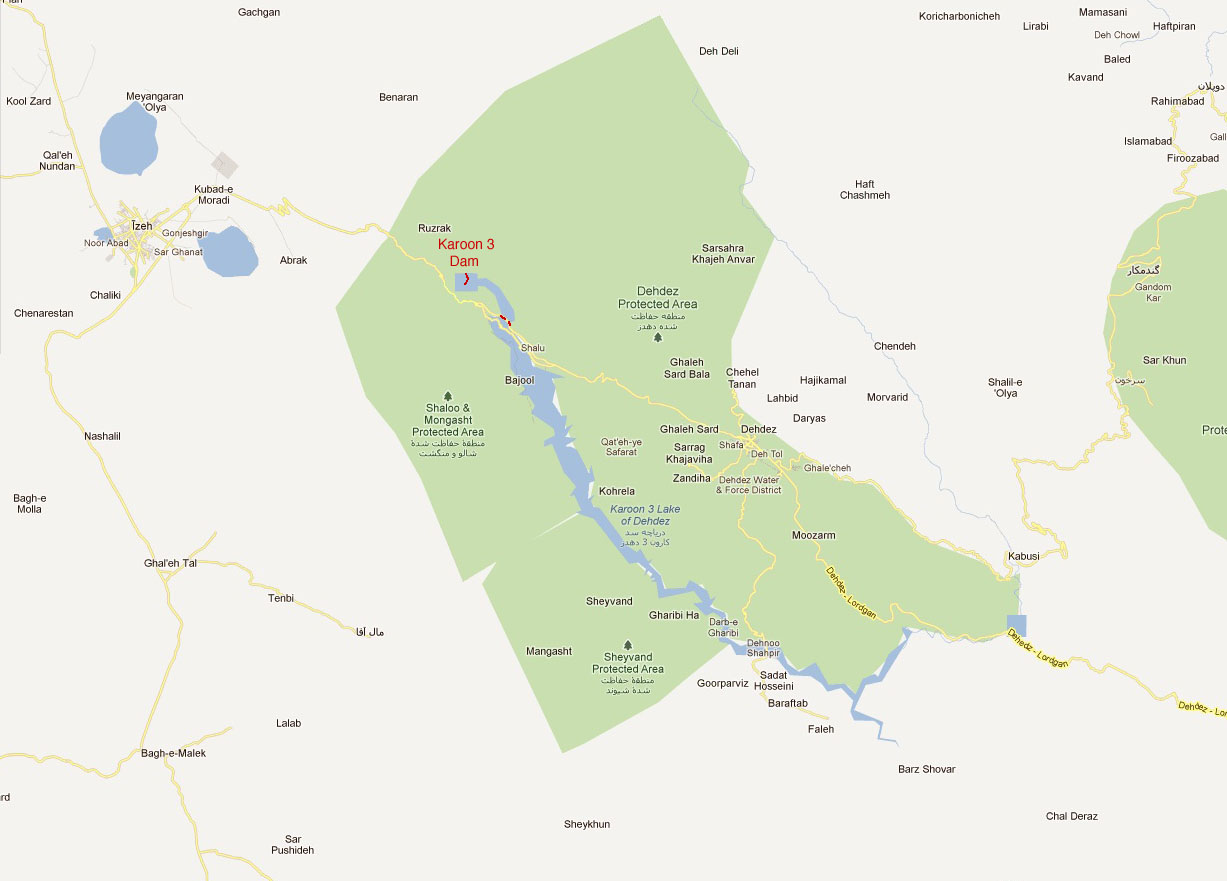 The bridges cross the Karoon River midway between the cities of Izeh and Dehdez. 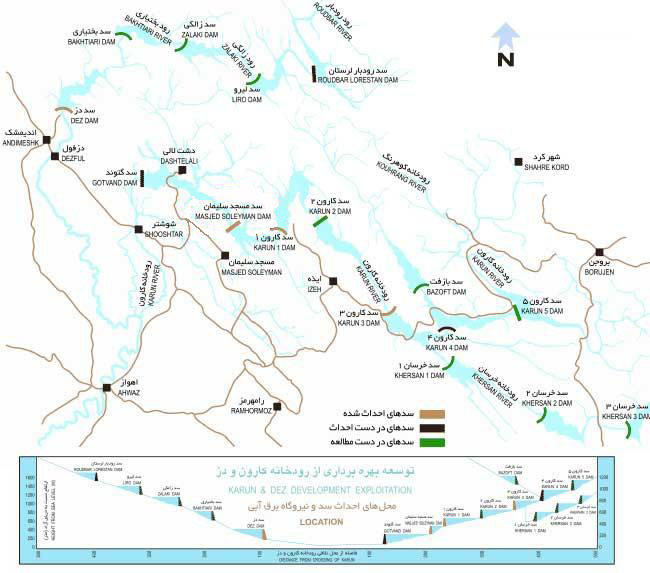 The entire region around the Karun and Dez Rivers has grown into a giant collection of huge dams that began with the Dez Dam in 1963 shown in the upper left. Karun Dams 1, 2, 3, 4 and 5 can be seen from left to right in the center of the map. Iran's second highest bridge near Lali opened in 2011 and is also a reservoir span that crosses a Karun River reservoir upstream of the newly completed Gatwand Dam. 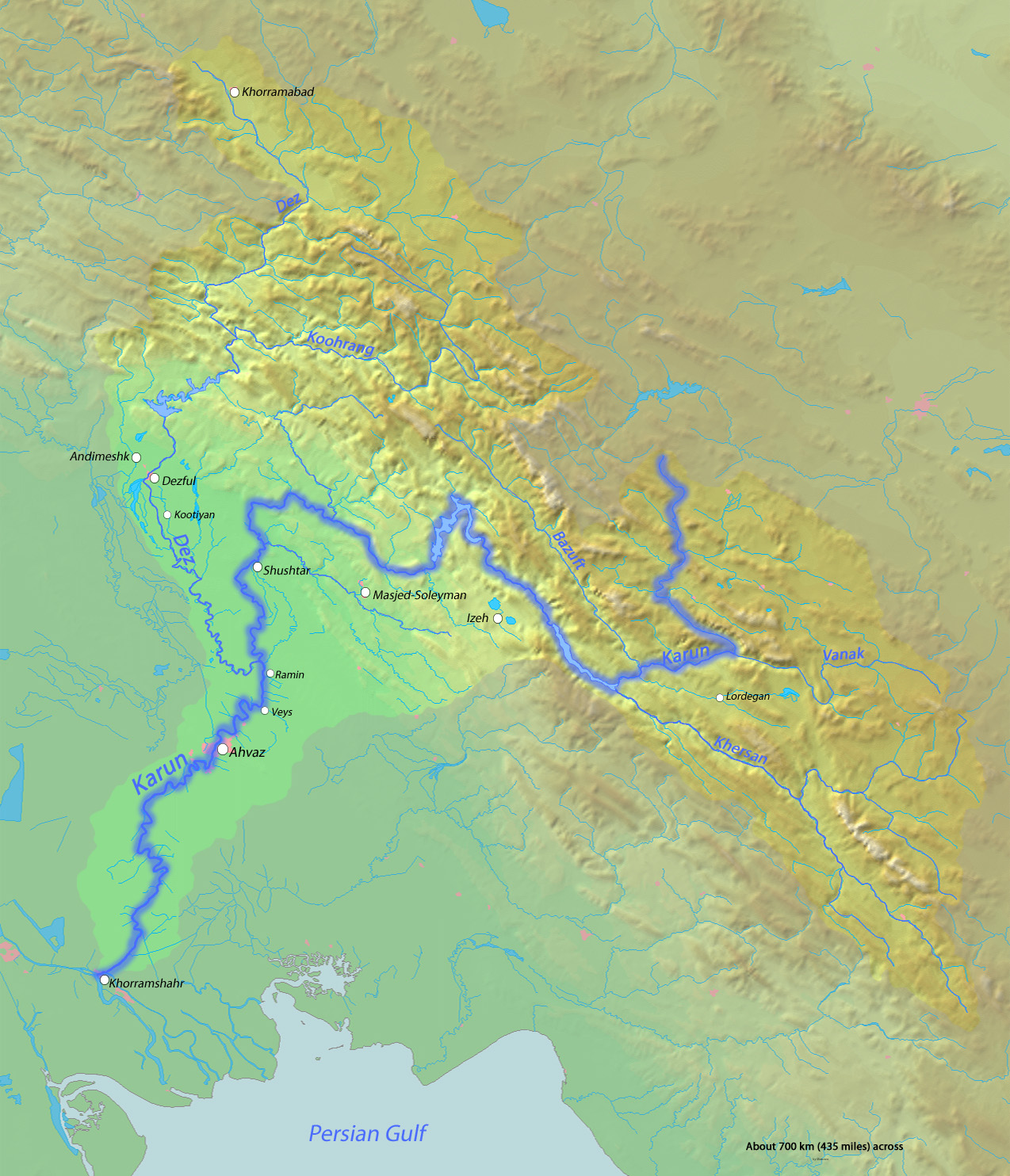 The Karun River is Iran's longest and only navigable river at 720 kilometers while the Dez River measures 400 kilometers in length. 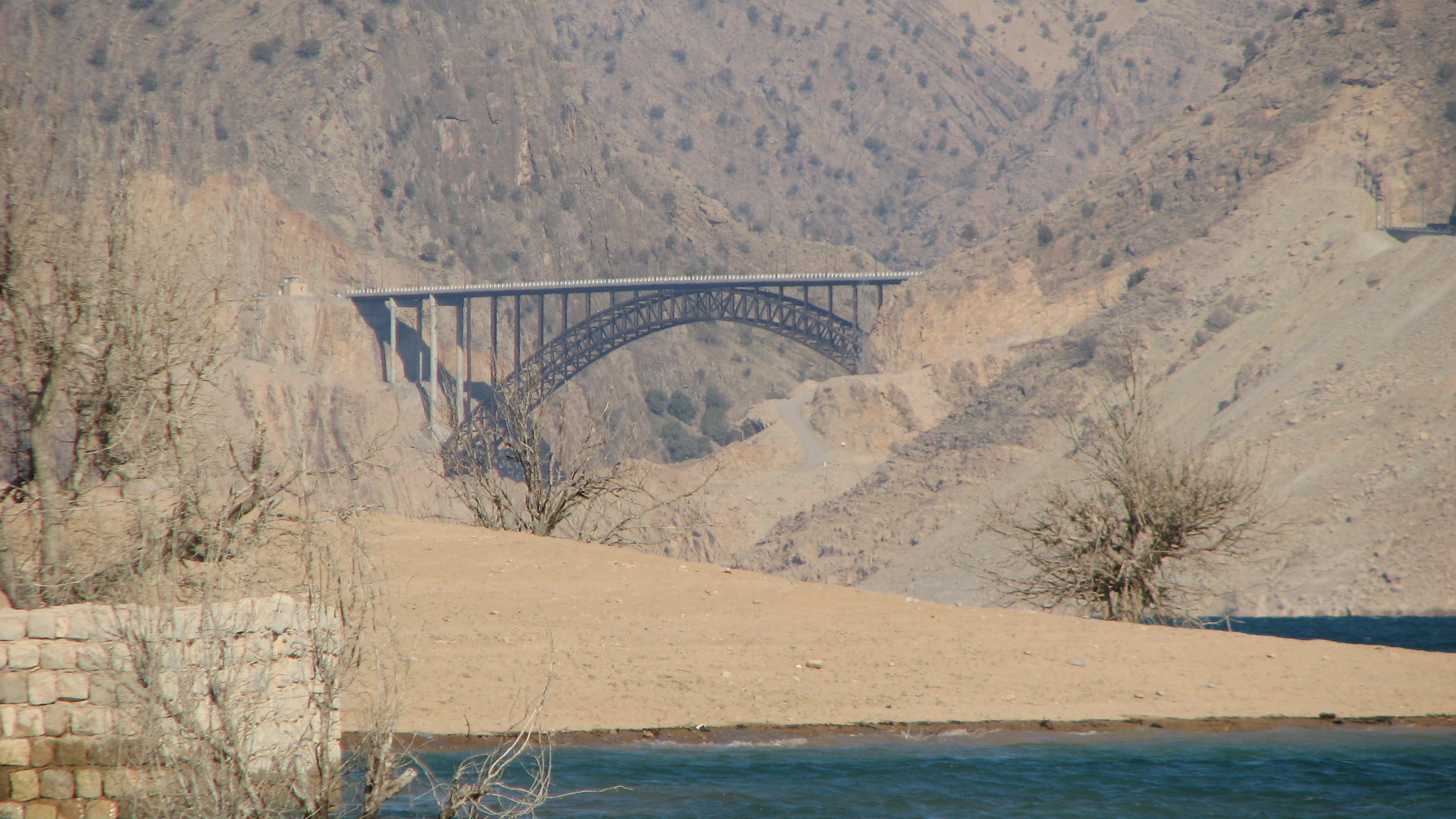 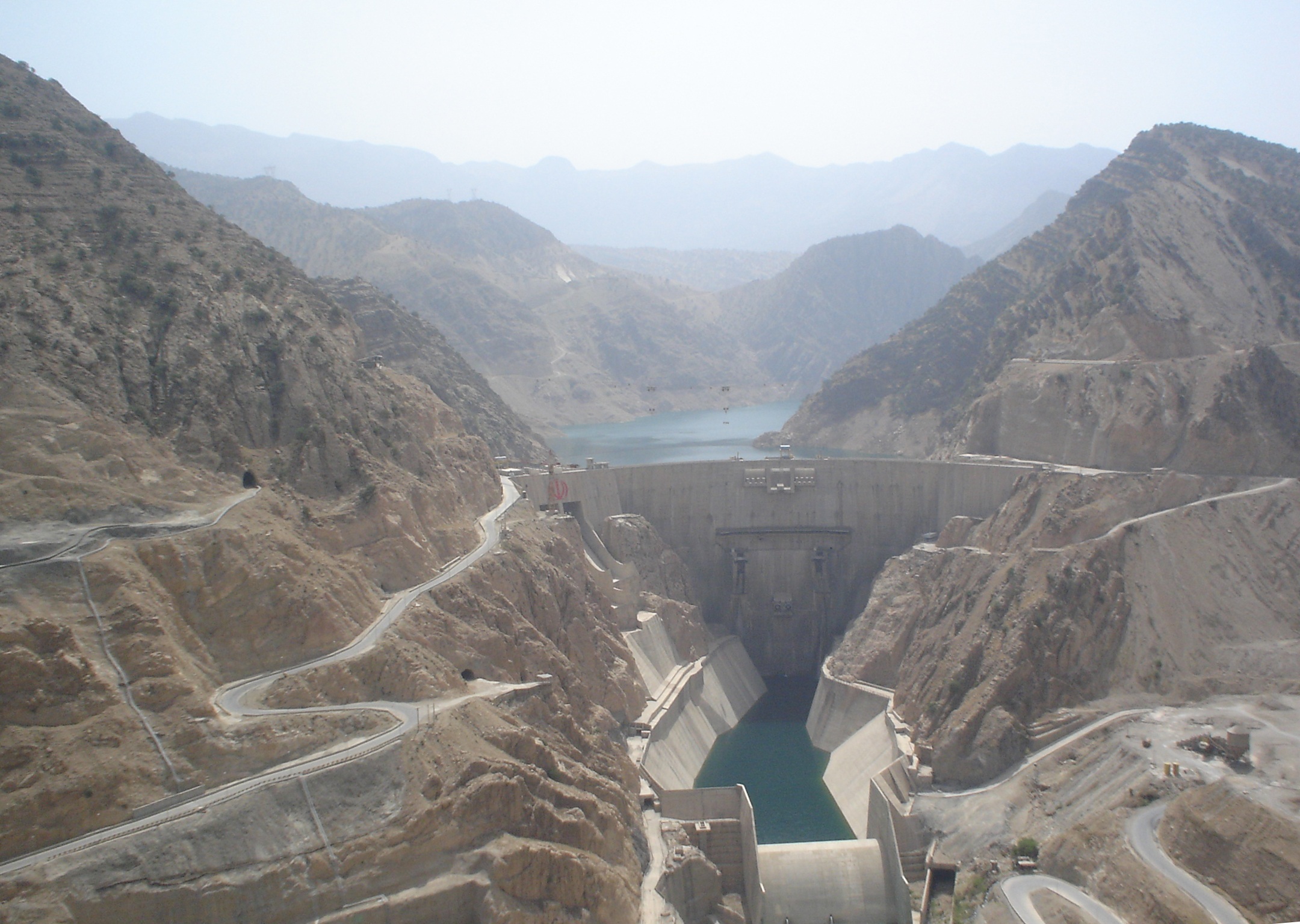 The face of the Karun 3 Dam. 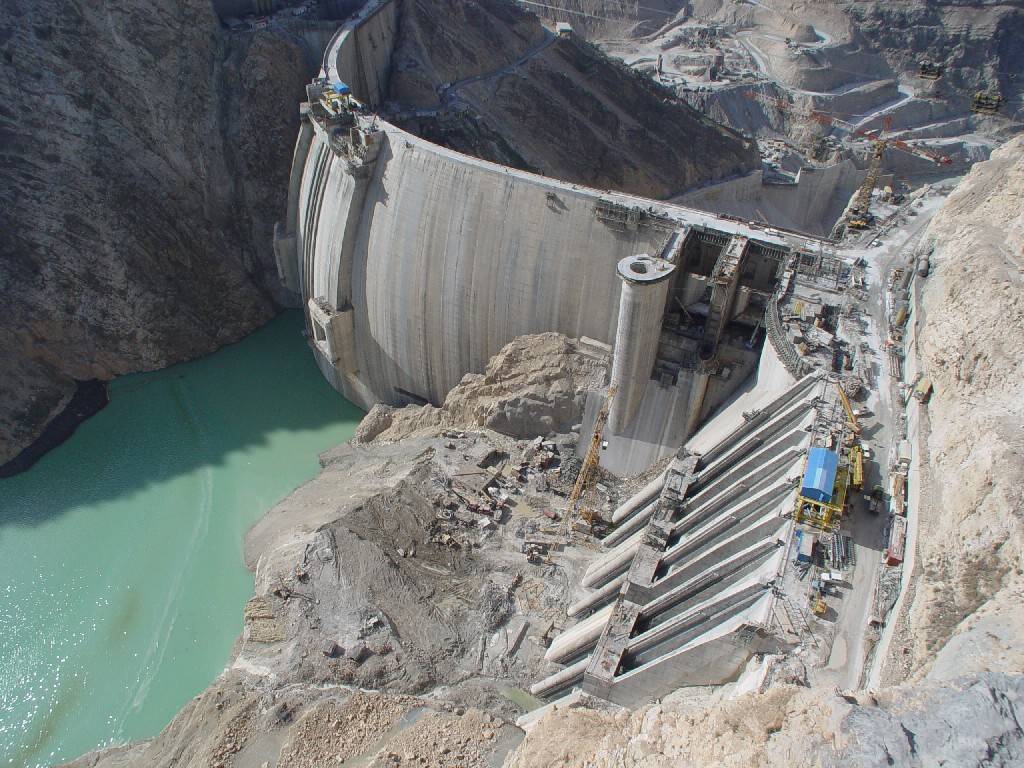 Karun 3 Dam in the early stages of reservoir filling. 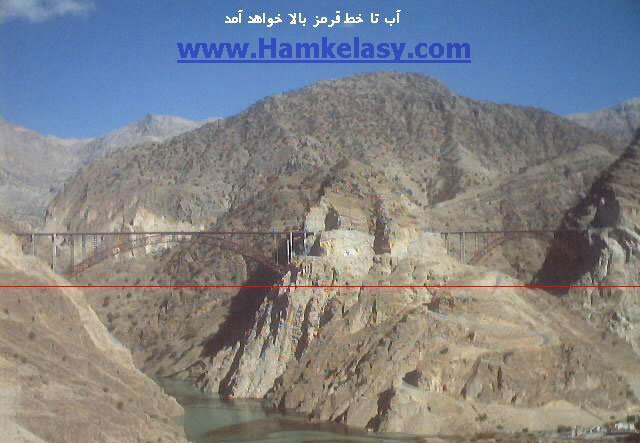 A line shows the eventual level of the full reservoir. 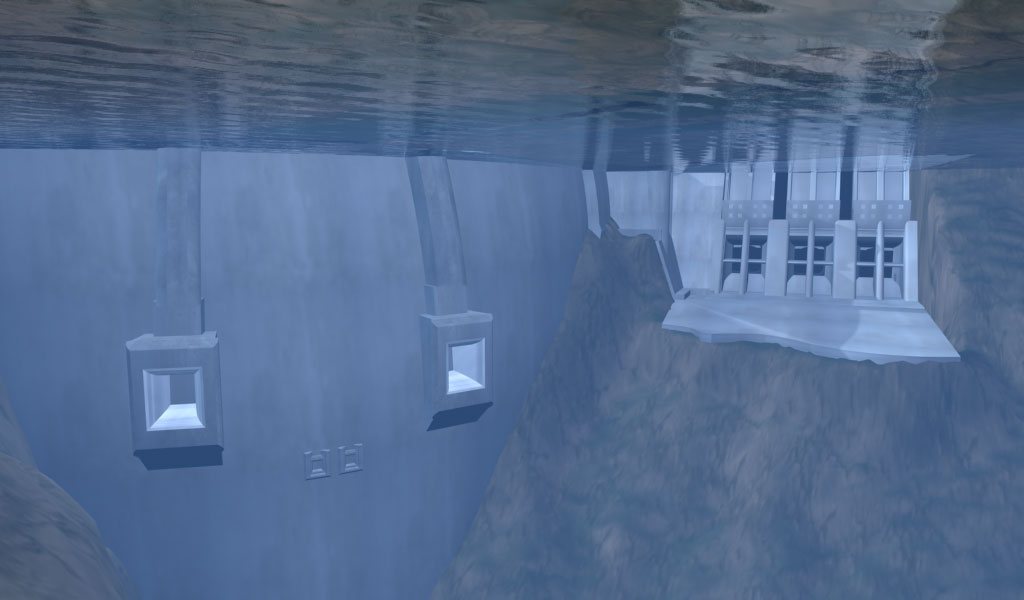 A computer image of how Karun 3 Dam looks underwater. Image by Adib Souly. 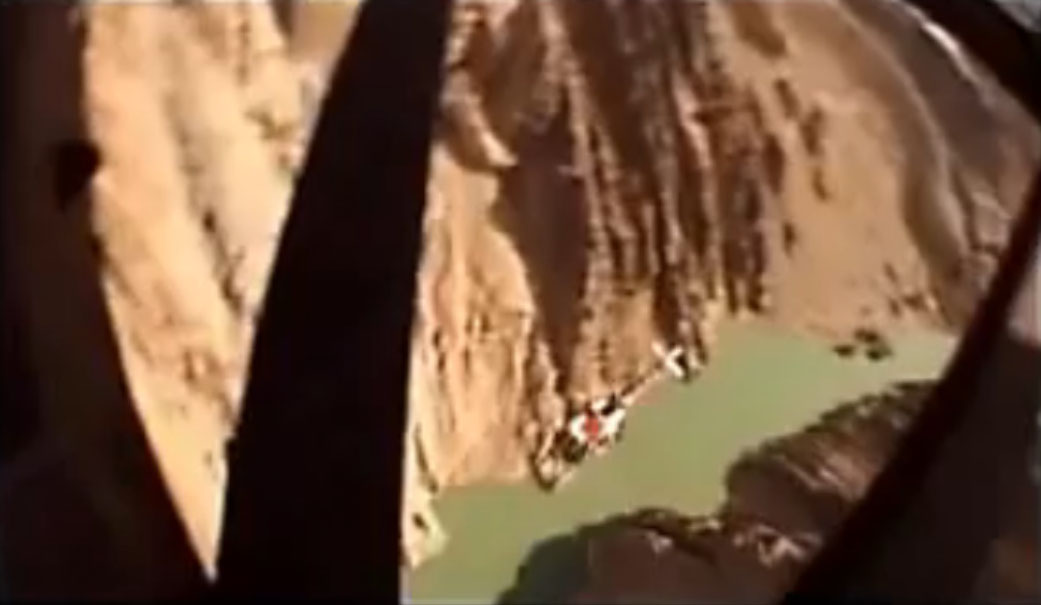 An image from an online video shows a helicopter zooming under the newly completed span. 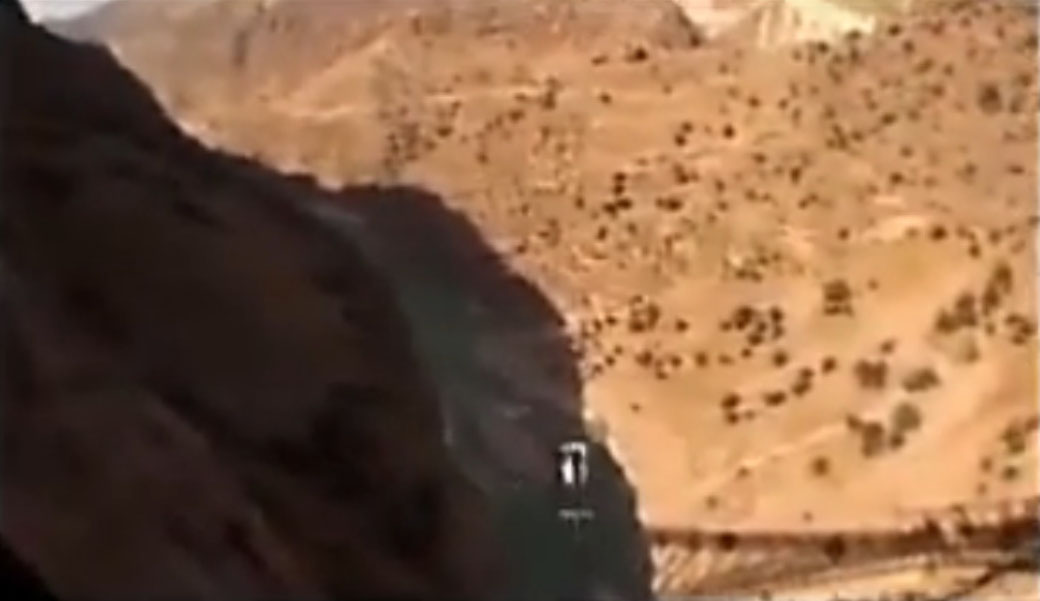 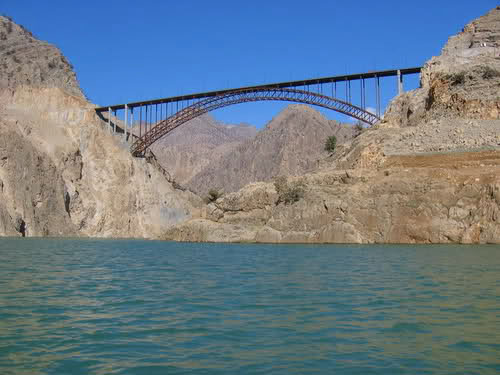 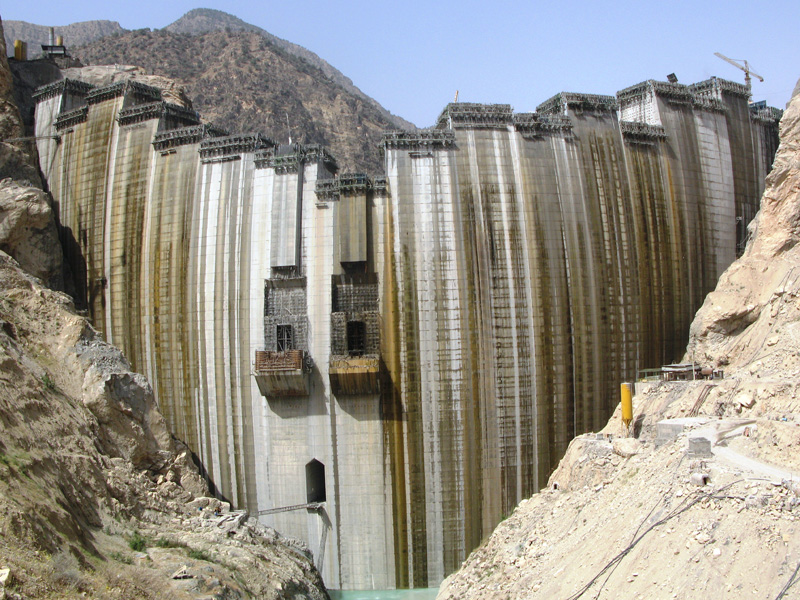 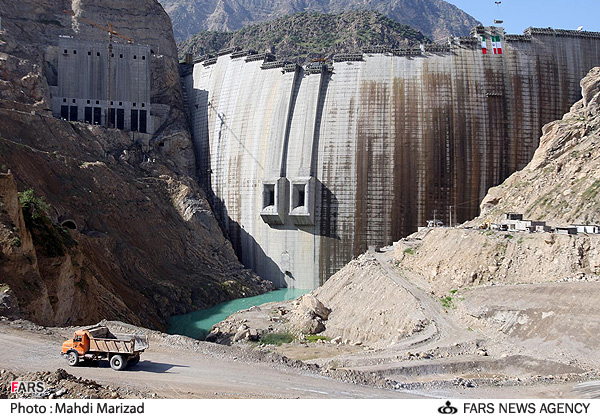 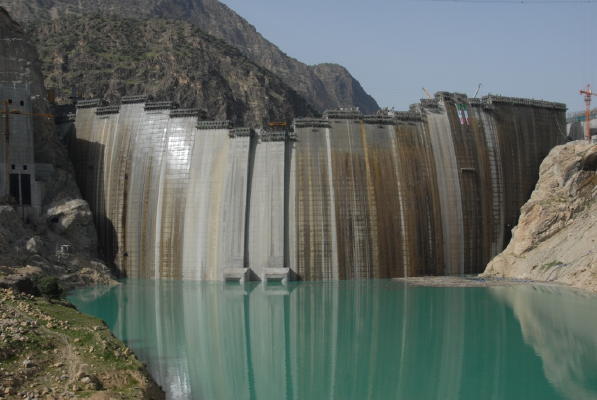