Referred to as either the Loa River or Conchi Viaduct, this 336 foot (102 mtr) tall towering trestle was the second highest railroad bridge in the world upon its opening in 1888. Only France’s Garabit Viaduct was higher at 407 feet (124 mtrs). Ironically, just two years later, Chile would open a railroad bridge nearly as high over the Malleco River. More than a century later, the Malleco is regarded as Chile’s greatest work of bridge engineering while few even know of the Conchi Viaduct. Part of that is due to the bridge’s remote location in the flat, barren desert of the remote Antofagasta province of Chile and part of it is due to the trestle’s abandonment in 1914 when a realignment bypassed the bridge. The spindly trestle is also less of an engineering achievement than Malleco with business-as-usual box towers and simple girder spans of 80 feet (24 mtrs). Today, the bridge still stands across Chile’s longest river carrying pipes and a road instead of locomotives.

The Antofagasta (Chile) and Bolivia Railway was constructed over a period of years between 1873 and 1892. An extension of the line to La Paz was constructed from 1908 to 1913. The organization was unusual as there were two separate administrations, one in Antofagasta covering the Chilean lines and one in La Paz covering the Bolivian lines. Still in operation today, the Ferrocarril de Antofagasta a Bolivia’s original narrow gauge of 2 ft 6 in (762 mm) was converted to 3 ft 3 in (1,000 mm). You can read more about the rail line at http://en.wikipedia.org/wiki/Ferrocarril_de_Antofagasta_a_Bolivia. 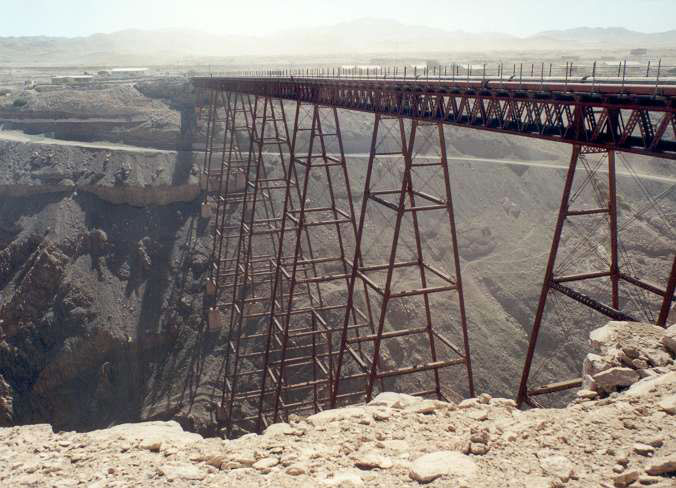 Loa / Conchi Viaduct satellite image with the bridge crossing near the bottom.

The Antofagasta railway was realigned in 1914 to cross the Loa River upstream of the bridge as shown by the arrows. A dam and reservoir are located between the two crossings.