At the time of its opening in 1993, the Mezcala bridge was the highest bridge in Mexico and the second highest cable stayed bridge in the world. The Mezcala is also the largest and highest of many spectacular bridges on the incredible México City-Acapulco Highway. Built to connect Mexico City to the vacation and resort town of Acapulco on the Pacific Ocean, the 163 mile (263 km) long highway was one of Mexico’s first major toll roads and was a forerunner to the even more spectacular Durango-Mazatlán highway scheduled to open in 2012.

One of the first double span cable stayed bridges ever built, the Puente Mezcala consists of three tall towers that support two uneven spans of 1,020 feet (311 mtrs) and 984 feet (300 mtrs). The central tower of Mezcala is notable for being the tallest bridge structure in North America. Rising 774 feet (236 mtrs) from the surface of the foundation to the top of the tower, pier 3 is 28 feet (8.5 mtrs) taller than the Golden Gate bridge! During construction, the road deck was initially cantilevered out from both sides of pier 3. As the two central spans grew in size, the stability of pier 3 was ensured by tying the two sides of the deck down to the ground with thick anchor cables. Bridge sections for tower 3 were raised 500 feet (152 mtrs) from the floor of the valley while deck sections for towers 2 and 4 were launched out from the side of the canyon.

Known as the Autopista del Sol, Mexico’s 4-lane “Highway of the Sun” is a museum of Mexican bridge engineering. In addition to Mezcala, there are four other high bridges along the route including three more cable stayed bridges. The largest of these, the Puente Quetzalapa, is a conventional design with two H-frame towers while two single tower bridges cross the Barranca El Cañon and El Zapote.

The most unusual puente of all on the México City-Acapulco highway is North America’s largest “fin back” bridge over the Papagayo river and reservoir. Mexico has become fond of the beam bridge style known as the “fin back”. A prestressed beam bridge with a highly variable depth of prestressing, the fin back design is unique for having the internal cables at their highest as they pass over the piers, enclosed in a wall or “fin” of concrete. The double hump profile may look similar to a cable stayed or extradosed bridge but the engineering has more in common with a beam bridge. Many consider the lower profile to be more attractive than a conventional prestressed beam bridge.

The first fin back bridge was built in Nuremberg, Germany for a commuter railway in 1969. In the U.S., the only one I know of is the 1987-built Barton Creek bridge near Austin, Texas with a main span of 340 feet (103.5 mtrs). Mexico built their second one in 2005 with the Texas-sized Texcapa bridge on the still unfinished México City-Tuxpan highway. Also planned for this highway is a monstrous crossing of the San Marcos river with two large fin back spans and a central pier of more than 715 feet (218 mtrs) in height that will become the second highest in the world after the Millau Viaduct in France. 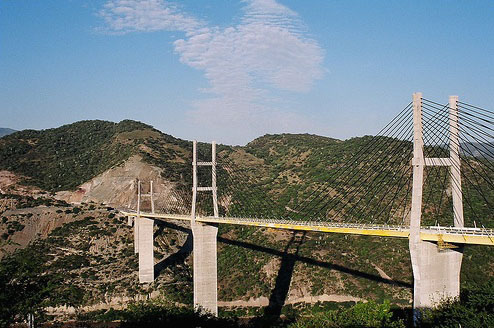 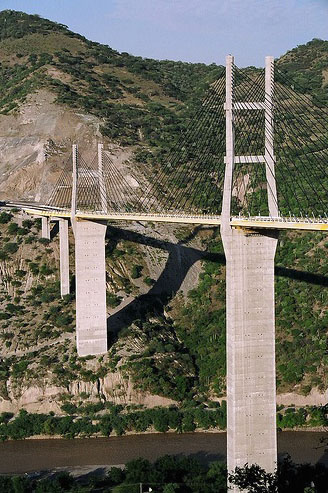 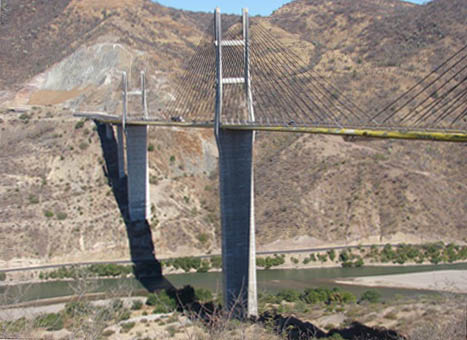