The longest arch bridge ever built in Spain, the soaring Tilos is also the highest bridge ever built in the country. Located on the Canary Island of La Palma, the concrete arch carries a 2-lane road over the canyon of Lime trees, hence the name of the bridge. The fifth largest of the seven Canary Islands, La Palma is a volcanic island with several deep gorges that run down from a summit that rises 7,950 feet (2,423 mtrs) above the sea. The island drops another 13,000 feet (4,000 mtrs) to the floor of the ocean.

The construction of Tilos was somewhat different than similar sized arches whereby a tower is usually erected on either side of the gorge and cables temporarily radiate out from it to support individual sections of the arch until the two halves are joined in the middle. With Tilos, the roadway and support spandrels were built outward at the same time as the arch, eliminating the need for a high line. To prevent the two halves of the arch from falling into the gorge, several cables were attached from the road deck down to the arch within each spandrel panel. Once the next vertical spandrel support was built up to deck level and connected to another short span of roadway, then the arch rib was built out a little further and the process repeated itself. Once the two sides of the arch were closed in the middle, the temporary cable stays were all removed from inside the spandrel panels.

With a main span of 837 feet (255 mtrs), the narrow 20 foot (6 mtr) wide arch rib of Tilos appears even lighter and more graceful than similar sized concrete arches. As a monumental piece of Spanish engineering, the Tilos arch will continue to be an inspiration to the thousands of yearly tourists who traverse this beautiful tropical island getaway.

If you plan to visit the Canary Islands, Tilos is not the only high bridge worth visiting. Nearby Gran Canaria Island has two high bridges including the beautiful Guiniguada Viaduct near San Jose Artesano and the Cuesta da Silva Viaduct near San Felipe. Both are more than 328 feet (100 meters) high. Also planned for Gran Canaria Island is the Tenoya Viaduct - a concrete beam bridge that will rise 364 feet (111 meters) above the ground near the town of the same name. Though not as high as the three previous bridges at 230 feet (70 mtrs), a unique cable stayed bridge is planned near the town of Teror, higher up on the slope of a Gran Canaria volcano.

About 300 miles (483 kms) north of the Canary Islands is the Portuguese island of Madeira, home to the Ponte dos Socorridos, a beautiful extradosed bridge with rare concreted stay “sails” similar to the Ganter bridge in Switzerland. Located near Câmara de Lobos, the unusual span carries a 4-lane highway about 394 feet (120 mtrs) above a V-shaped canyon. Also on the island is the no less ordinary João Gomes bridge, a prestressed concrete beam span that is wedged between two tunnels 410 feet (125 meters) above a tight canyon near Funchal. 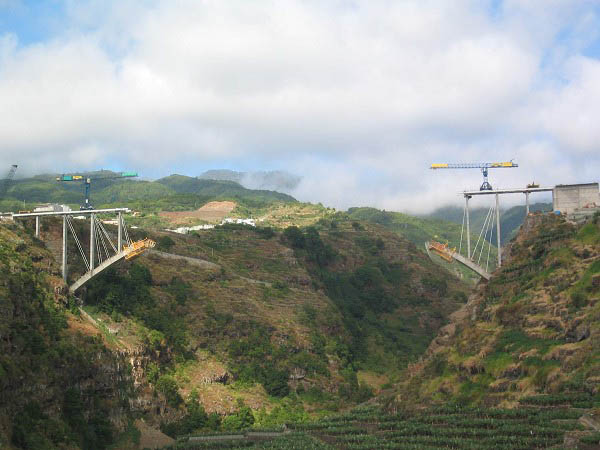