Simple and elegant, the Wilde Gera is Germany’s largest and highest concrete arch bridge. As part of the new A71 autobahn, the bridge crosses over a valley deep in the Thuringian Forest. What could have been just another boring concrete beam bridge is now a soaring sculpture of concrete and steel. Temporary cable stays supported the two halves of the arch during construction. The 827 foot (252 mtr) arch supports six beam spans of 138 feet (42 mtrs). The thin deck consists of a trapezoidal steel trough and a simply reinforced concrete slab. On a cost per mile basis, the A71 is the most expensive highway ever built in Germany. The Rennsteig tunnel is also on the A71. At 5 miles (8 kms) in length, it is the longest road tunnel in Germany.

Upon its completion in 2010, the Froschgrundsee bridge high speed rail crossing between Coburg and Erfurt will surpass Wilde Gera as Germany’s longest arch bridge with a span of 886 feet (270 mtrs). 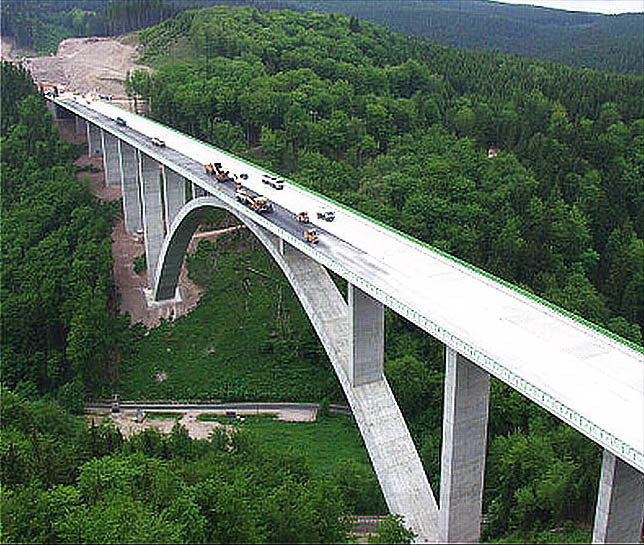